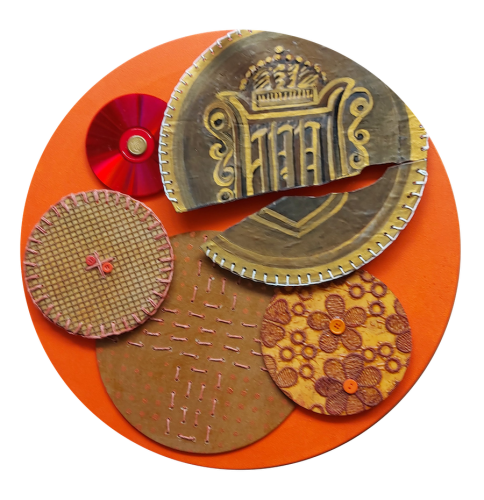 A selection of five buttons, four of orange plastic and one brass. It was the brass button that intrigued me as it had a crest embossed on it. A royal or military connection perhaps? A search on Wikipedia revealed that such button types were often ‘livery’ buttons. These buttons were often worn on the uniforms of those who provided domestic service to nobles or aristocrats and denoted a form of ownership. Other appearances of such buttons on clothing were to identify membership of a company or guild. Livery buttons, dating back several centuries, are often found through metal detection as household uniforms in a decrepit state were frequently buried.
I have incorporated sewn thread into the work to represent domestic servitude. The broken crest design is to record a discontinued practice, that of lord and servant.