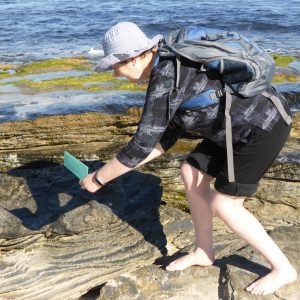 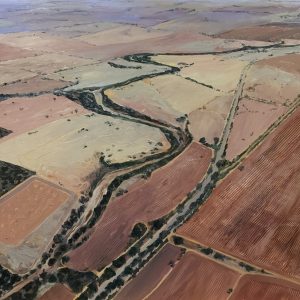 The Qulit, Wheatbelts of Western Australia, Oil on aluminium, 60x60cm 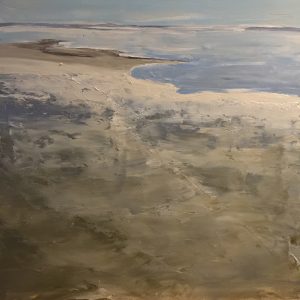 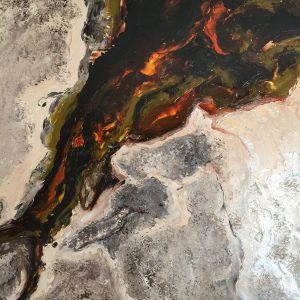 Rockpools of Coogee 2, Oil on aluminium 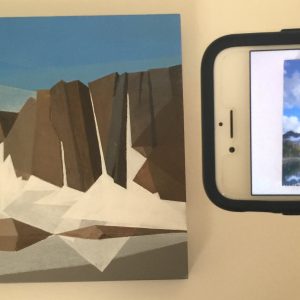 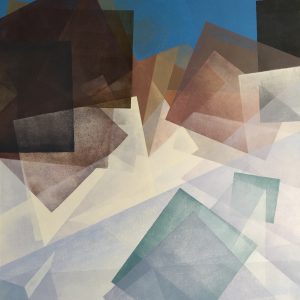 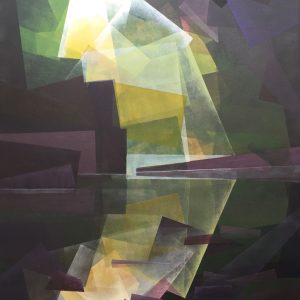 Water has the ability to be life threatening and essential to life, an unstoppable force, both patient and ungovernable in the way it transforms the earth and every drop is connected in an immense cycle capable of recording and reminding us of eons of change. A cycle we are still struggling to understand. My current work investigates climate change, water’s global and local impact on us and ours on it.

Thirty years ago while living in Canada I hiked and sketched just a few of the many spectacular glaciers there. I felt connected to an earth that seemingly paid no heed to man’s presence. Last year I began to wonder how those glaciers were coping with climate change and researched photographers and scientists who had recent images taken from the same view point as my initial artworks. Shocked to see the changes after only thirty years, the challenge was how to convey the immediacy of that message through art in a powerful and engaging way.

Using augmented reality, via a phone AP, I was able to compare a current photograph of the glaciers to a series of small abstracted paintings based on those original sketches from the 1980’s creating a very graphic vision of the effects of climate change.

By exploring glaciers and rock pools half a world away from each other I aimed to highlight the interdependence of the waters of the world and encourage discussion and action. These works also contrast studio based acrylic abstractions with alla prima works in oils. As water exists in different states, so too does the art. This formed the core of the 2019 Water Ways Adelaide Fringe Exhibition, where I invited five other South Australian artists Keren Seelander, Ursula Kiessling, Rod Bax, Margaret Ambridge and Mark Fitz-Gerald to interpret water’s qualities and states in a world on the cusp of irremediable climate change.

Participating in a 2013 New Zealand paleontological dig of South Island creek-bed stromatolites highlighted the vast history lying beneath us and past climate changes. Travelling from the top of Fox glacier to the underground rivers and caverns of Karamea underscored the connectivity of all earth’s waters.

In 2017, as a response to an invitation from the Centre for Creative Health RAH, I began to investigate how spending time in ‘Blue Space’ (being by the ocean) can affect our brains beyond regular colour vision through non image forming pathways, improve creative decision making and change our brainwaves significantly and positively. Science had confirmed an integral, yet instinctive, part of my own art practise and path to well-being. I explored the different ways light, colour and place expose the essence of a place. What experience, memory, mood and time reveal about a well-known location and in turn how being in a place changes you, resulting in an Adelaide Fringe 2017 exhibition with Jane Skeer and Sue Michaels.

More recently I undertook field trips to see the filling of Kati-Thanda-Lake Eyre and an Artist Residency in the wheat belts of Western Australia which enabled me to compare the issues of rising salinity through mismanagement of land with natural salt lake environments. From Beverley east to Kalgoorlie-Boulder, conversations with farmers, indigenous elders, geologists, water and land-care specialists as well as mining environmental officers illuminated the history of water use. The understanding gained of water’s role in indigenous culture, exploration, mining, the expansion of the wheat belt, the current and ongoing challenges facing future water demands and the threat of climate change will inform a new body of work to be exhibited in 2020. I will also apply to participate in Art Climate = Change in 2121.

Art has the ability to illuminate, challenge and arouse. Every location has unique issues to explore. It is through the understanding of, and reflection on, each location, its geology, ecology, people and needs that meaningful connection and art can be developed in response.