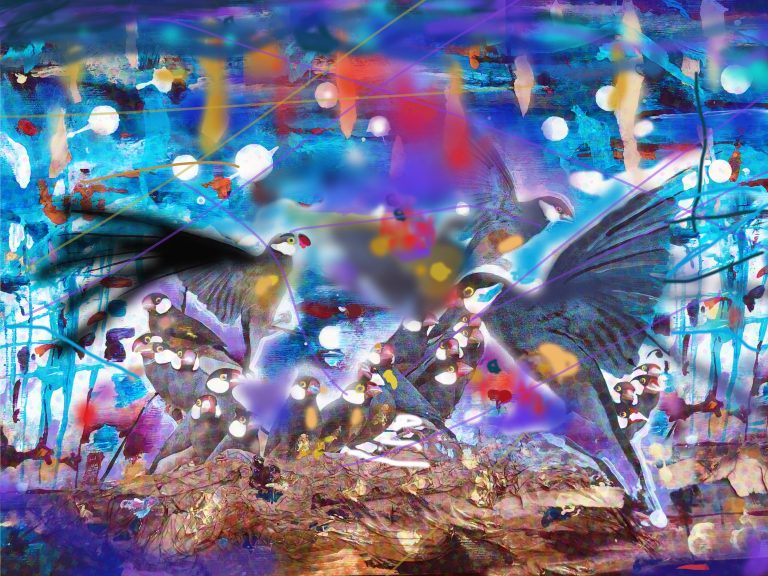 Title : Neither here nor there

The Java sparrow is described as a gregarious bird which feeds mainly on grain and other seeds which in turn meant being perceived by rice farmers as a pest. For centuries it has been a popular cage bird a commodity that can be traded. It is my understanding that birds, in general, whether introduced or native are under threat by way of pollution, bush fires and therefore constant loss of natural habitat; “. Many by way of adaptation have learned to live in close proximity to humans being hand fed or feeding from piles rubbish. The Java Sparrow was declared illegal in California yet introduced in many places around the world. Upon receiving the image with the Java sparrows on it, I read about them being treated as both pests in their homeland and pets in far off places as if never quite at home. Ideas about being, unwanted, displacement and adaptation came to mind. Basically not fitting in hence, the title neither here nor there

I am a Melbourne based visual artist inspired by everyday life; people, stories, my surroundings, the environment and nature. My art practice also considers ideas and concerns about future survival for all species on the planet. This in addition to an awareness about the importance of recycling and my footprint and its impact on a dire situation that has made life untenable for many. Consistent with the latter, I work with found objects such as canvas, pieces of paper in addition to materials such as glue, acrylic paint and ink. Given that this is an online exhibition I used image manipulation software to optimize what was initially a painting onto an image that would display well online. On this opportunity I re-visit the idea of Collage which I embraced whilst training to become a graphic artist at an era when image manipulation was done in an analogue way and art viewing was done on- site.