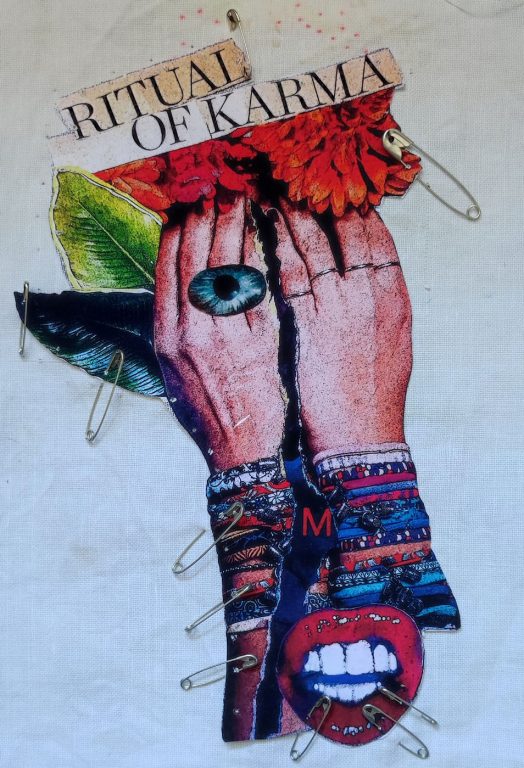 “Ritual of Karma” represents my story of rebellion and reconciliation.
I come from an Italian family. When I turned 10 the women in my family began preparing for me the
“dowry”: the set of household linens I would have to take with me once I was married. Some pieces
were new, hand embroidered by my aunts. Other were old, passed down from generation to
generation for over 100 years.
As a little girl from time to time, I would sneak over to see this treasure that was slowly growing over
the years. But as a teenager, I began to hate my dowry and all that it represented. It was a symbol of
everything I didn’t want to become. I didn’t want to
be like my mother, my grandmother and all the other women in the family.
For several years I did everything I could to go against the family rules giving my parents a lot of trouble, creating a deep rift.
As I grew up, I realized that those linens, were a ritual of sisterhood, a ritual of transition and
belonging. Later they became a symbol of healing to me.
I have never used my dowry but I treasure it. And I deeply love the women who passed it down to me.

Art Aviso Artists were supplied with a page from a 1950’s National Geographic Magazine selected at random, which was to act as the basis of an artwork for exhibition in an evolving online project.

Here is how they responded…

Italian born, she works in Verona but finds a  great source of inspiration in Berlin. She defines herself as a serial and compulsive photographer of posters and cracks in the walls.
She studied painting at the Fine Arts Academy in Verona and Bologna and later she obtained a specialization in art teaching according to the method of Bruno Munari. She has been fascinated by this artist since her adolescence, greatly influencing her need to constantly experiment.
Due to a serious illness she abandoned  her artistic career for several years but still expressed her creativity through the composition of collages during that period. After a long period of recovery, she resumes the Munari art workshops, in schools and private laboratories.
in 2020, during the Italian lock-down, she finally decided to devote herself totally to her art. This is why she considers herself as an emerging artist.
It is precisely in that time that she resumes the collage technique. These are rarely finite compositions. She creates “temporary collages” with images that she often reuses, adding small objects, flowers, sections  of watercolors or drawings. Fluo markers are used to screate textures on the human figure and with the help of photography or a scanner, she switches to the digital elaboration. She lessens in the observer the perception of the collage technique, giving it a more illustrative aspect.
Currently her work is focused on the female figure and its ancestral connection with the natural world.
In her research she elevates the woman from object to subject giving her a spiritual nature, sometimes dreamy, as belonging to a ethereal world.
With the Headless Women series, she wants to represent the detachment of the feminine from the natural world: the inconsistencies of modern society which, while proclaiming itself democratic, still inexorably tends to press women, to reduce their acquired rights, and not sufficiently recognise  their social value.