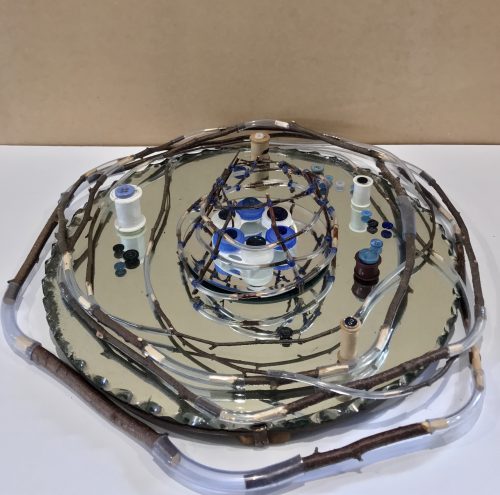 The title plays with the idea of ‘belly button’; the mark of our attachment and separation. An Omphalos, meaning ‘navel’ in Ancient Greek, is a dome-shaped stone marking the centre of the world; the earth’s belly button. A symbolic umbilicus (snake) often winds around the Omphalos, which also acts as a portal between the worlds of the living and the dead.

Buttons are centres and joiners, they hold things together, and are attached by threads that might be seen as umbilical. Buttons also undo and separate, releasing what they held together.

This Omphalos contains buttons and cotton reels that belonged to my grandmother; objects that I associate with her as the maker of beautifully crafted handsewn clothing. The mirror base creates the illusion of entry into a bottomless space. Twigs joined with plastic tubing encircle the space within the Omphalos; representing the natural and the artificial, nurture and entrapment.