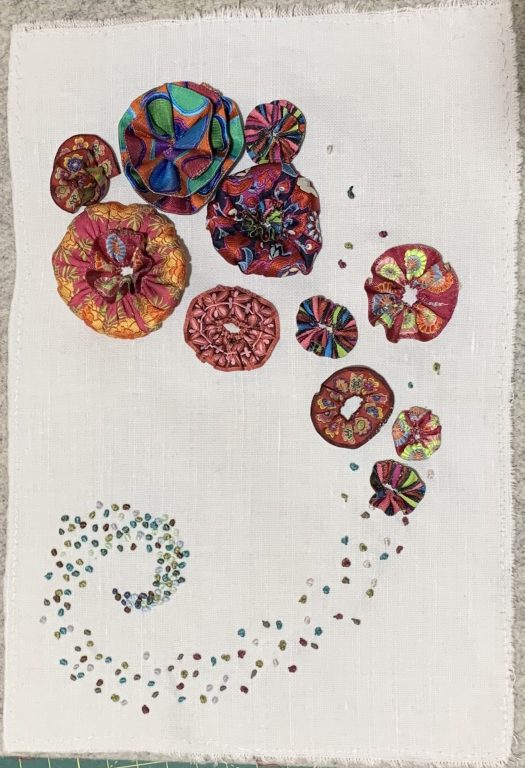 The embroidered French knots in muted colours of the winter landscape gradually spiral around and become bright three dimensional fantasy flowers suggesting our journey from Covid to a new more positive future. The French knots are made from embroidery threads and the flowers made from fabric ribbons. A metaphor of our life during and after the pandemic and hope for a brighter tomorrow.

Gail Theis was born on the Island of Grenada in the West Indies of mixed parentage. Raised in both the Caribbean and British heritage, she spent her early years travelling with her family.

Living first in the Caribbean and the Bahamas and later, England and New York and Africa. To her, the highlight of these travels was befriending many of the people she met.

On finishing school in the U.K., she attended Parsons School of Design in New York before returning to London where she trained as a Graphic Designer. She worked for several years in the design team at Christies the auctioneers.

She returned to art as her children became older and studied the atelier method at The London Fine Art Studios before taking a diploma course in Portraiture at Heatherley’s School of Art. She began making quilts on the MFA course at Wimbledon College of Art, from where she graduated in 2020.

Gail’s main focus is figurative and she has a dual practice: quilting and painting.

She uses the quilt as a metaphor for comfort and domesticity the language of women before their voices were heard. Gail weaves shapes, colour and texture and builds layers of symbolism to develop a narrative piece by piece.

Gail is one of the Graduates featured in The London Grads Now exhibition at the Saatchi Gallery. She is also featured in FAD magazine in their article about the exhibition