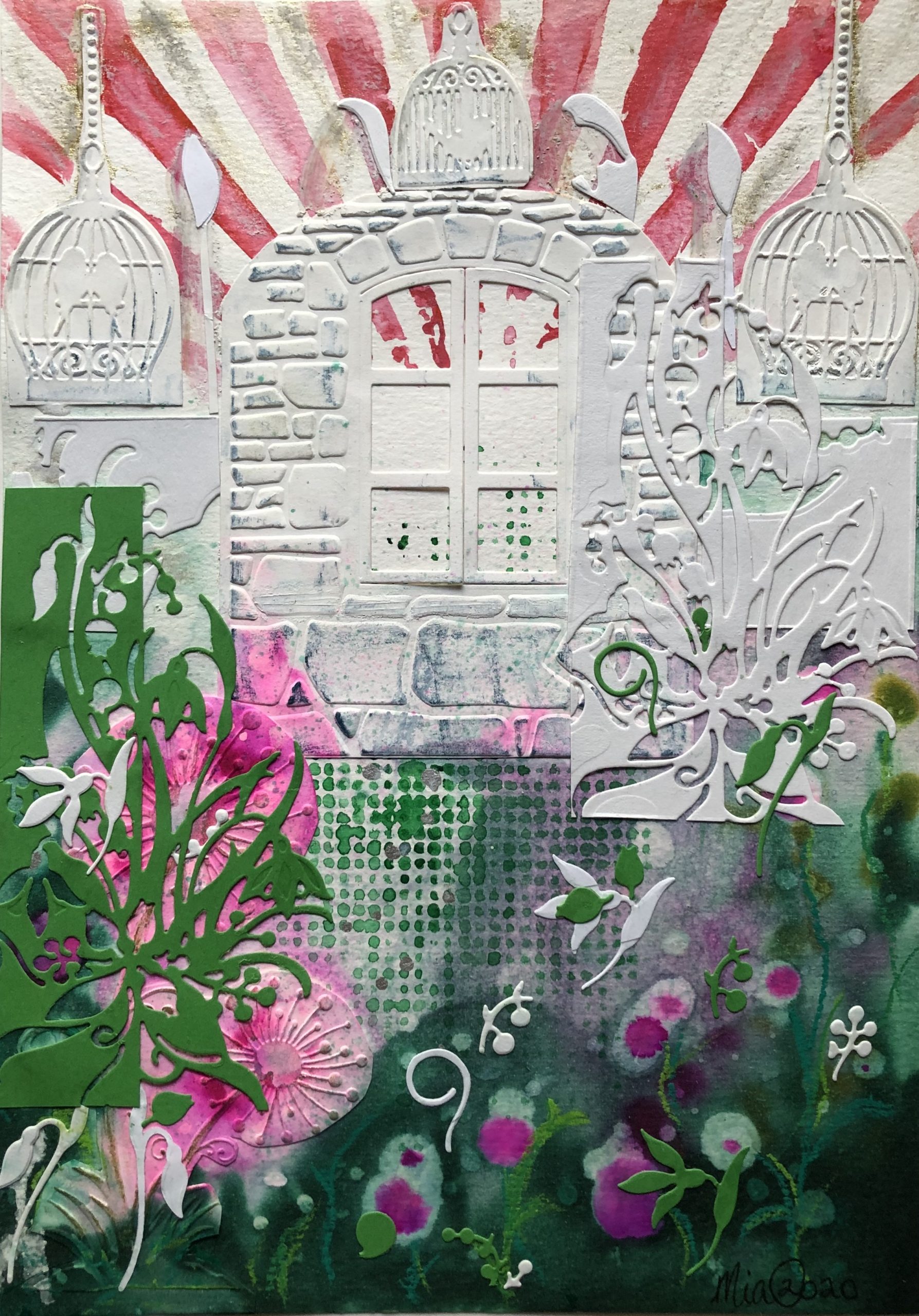 (36) Mia Oehlmann - The Jewel in the Gardens

The page given for inspiration of the work was from: Newnes’ Pictorial Knowledge Volume 3, The story of the world and its peoples, Crown of the Palace (Taj Mahal). Given such an iconic image as my reference point I wanted to do more research to capture the essence of the place as much as I could. In doing so, it was the colours and heat of the Indian sky with its inflection of gold shimmer and reds, as well as the repeating organic rounded shapes, and crispness of the white of the building itself that highly intrigued me. Most of all however, I was inspired by the significance and beauty of the lush gardens originally surrounding the stunning contrast of the white Taj Mahal. In researching this historical wonder of the world, I came to realise that the gardens were just as important to the Maharaja as the monument itself, in fact, they were said to be ‘part of’ it and were planned to envelop the structure and almost cradle it, and had in fact been restructured to be more like an English garden after the British Colonisation. I wanted to bring back some of that original tropical and fantastical garden element to the artwork that must have been there in its original state. To me, the Taj Mahal really is the Jewel in the Gardens.

Mia mainly works with oil paints and charcoal sketches, but also branches out into mixed media and sculpture, with a contemporary realism style however occasionally drifts into the abstract. Her love for people and their quirks has her drawn towards portraiture as her main focus but she also enjoys still lives where she attempts to capture a story or a moment in time. Although she now lives and works in Melbourne, Australia, Mia grew up on the islands of Stockholm Sweden, where she spent most of her time on or near the water, consequently her fascination with the play of light and reflections often come through in her work. Although Mia is mainly self taught, and started her artistic journey late in life during a difficult recovery after a major operation in late 2014, she has completed some short course work via Melbourne Studio of Art in Elsternwick and is currently at the tail end of a Fine Arts Degree majoring in painting through Curtin University. Mia has always been surrounded by the arts as her aunt is a professional painter and sketch artist in Sweden and her father was a jazz pianist and industrial designer before his untimely passing due to skin cancer in 2006. Mia has exhibited works at a number of exhibitions in Melbourne and has accepted commissions.

Mia was provided with the following page from Newnes’ Pictorial Knowledge Encyclopedia: