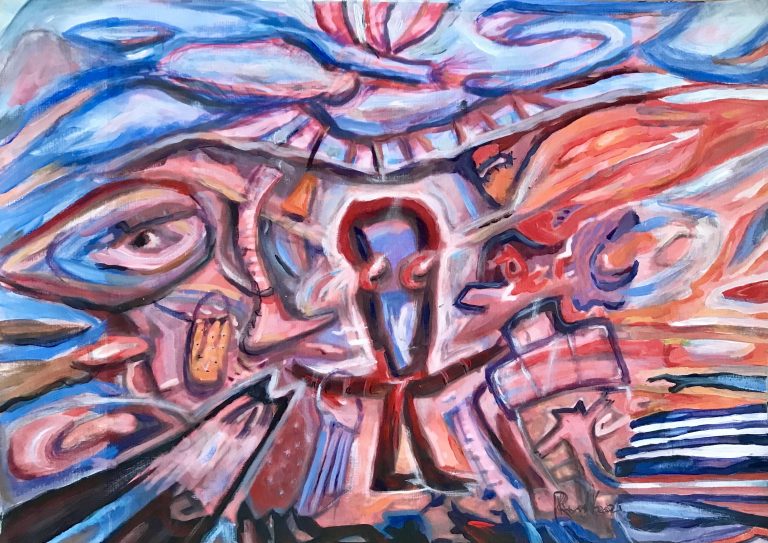 In Australia the traditional vacation has a history of being a sacred event that occurs each summer with the departure of families and friends from the city to the coast. The summer holiday usually involves heat and relaxation in water as a way of calming the mind and renewing the connection with family and fun. It is different to a trip into uncharted territory and usually involves return to a known safe comfortable place where fond memories have been established and often revisited years later in conversation at family events.
For me, the word vacation conveys the explosion of sensation and excitement cycling around in ones mind about the activities and possibilities offered when a person thinks about a holiday destination. The stimulus provided shows a strong connection to water and travel to a beach. Using imagination I have conjured and blended surreal images of objects, activities, colours and environments that represent the concept of an Australian vacation at the beach.

In my art I explore the unconscious mind and meld imagery using the power of imagination into a stage-like environment. Psychic automatism meets the real world in many of my creations and personal symbology fills in the space in between.
Research of subject matter is important and mulling over the way an idea connects with its title and how it is presented consume as much time as painting it some days. My subject matter is often elongated, distorted, and repeated throughout the composition to emphasise and exaggerate movement and rhythm. The colour palette in my work is often limited so when intermixing I maintain a relationship between the main colours selected. However, I also overlay vivid hues (complementary colours) to produce strong contrast and play around with tonal variation to indicate multiple sources of lighting. These techniques are important for creating a charged atmosphere.
in my work and objects often lose their identity and metamorphose. They could also be described as transformative from tight to a loose arrangement represented using dragged and hacked brushwork. I avoid completely describing a scene if is based on a life experience and prefers to let it dissipate into my favourite motif, being distorted cloud formations which I feel anchor the idea to a known object.
My art practise spans more than 35 years and displays an interest in the absurd and a keen observation of contemporary life events.