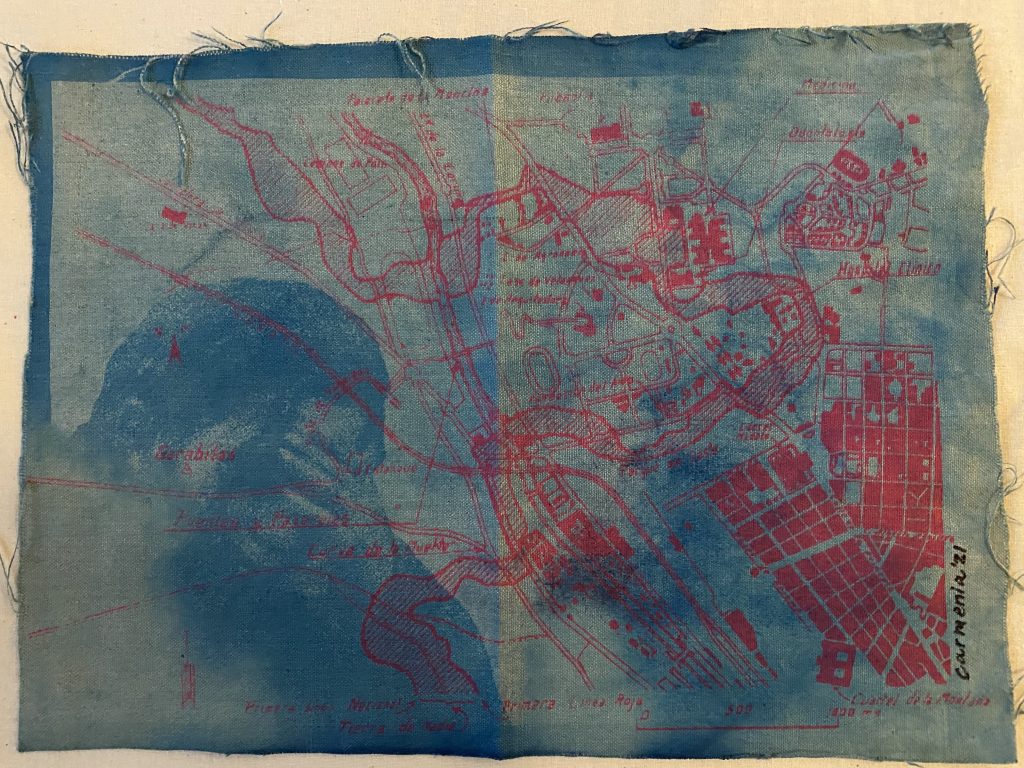 I am a part time artist, always trying to express what’s on my mind, learning techniques in printmaking. I love engraving, linocut, cyanotypes and etching. This is the first time I create a mixed media piece with cyanotype and screenprint. I live in Alicante, Spain and I love to join international print exchanges and be part of a bigger community.

When I read the title “Garden of Loss & Triumph” I immediately thought of the war. Usually people think that in wars there is a winner and a loser, even though we all are losers in the horror of war.

I wanted to capture the horror expression of a kid during Spanish Civil War through a cyanotype. The image was from one of many kids crying in the streets where they loss their parents, their houses and friends. The image is fading away to symbolize the fading away of the memories of those times.

Some time ago, I came across a map of the trinches in Madrid. I was astonished to see that the worst part of the battle was held in my University Campus. “No mans land” was right across my classroom.

How many people died on my campus 70 years before I was studying there?

After 2 and a half years of battle and siege in this site, the Republican side surrender, leading to the Fascists taking control of Madrid. Therefore, I found this battlefield so important that I decided to screenprint the map on top of the crying kid.

In Spain, our society decided to never look back, to forget the war and never talked about it. For many and many years, the memories of the victims were silenced and treated as a tabu. Now, when most of the victims are dead, part of the society wants to remember, find the corpses of all the missing victims and put their name on their graves. But another part of society don’t want that to happen, and insist to keep their memories silent.

I guess in this garden there is no triumph, just loss. Unless until all the victims have names and our Country acknowledges the losses, we may never find any closure and and triumph.