CARAVAN – Notes about the Artworks 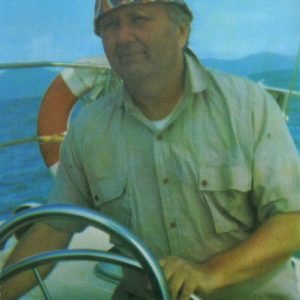 This is an image of my father on a holiday without his family. I need to give you some context here there are 9 kids in my family – there is no holiday picture that is not crowded with family or being used as a historical record of ‘we were here’, all except this one. This picture shows a completely different journey, one where there is excitement, adventure and freedom and a every time I see this picture it makes me think ‘ah yes – that is how I want travel’ 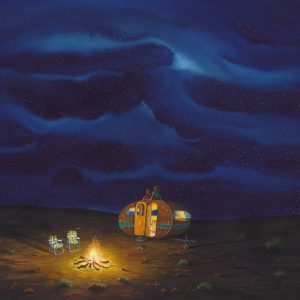 This work is about a moment in time under a desert sky. The celebration of simple pleasures like fire, the vastness of empty space both vertically and horizontally that go on and on and on. The joy of a journey that may have left you stranded but you choose not to care. The joy of an old tired home that has lived life with you and carries the scars and victories of many dusty roads. A place full of nostalgia yet potent with abandonment for the present excitement. Also a mystery. How dose such a home come to be in such a place with such a family. What is beyond the edges of the page and yet who cares. A challenge to stay and enjoy or instead inspired to wander the dust and imagine the moon that isn’t quite there. 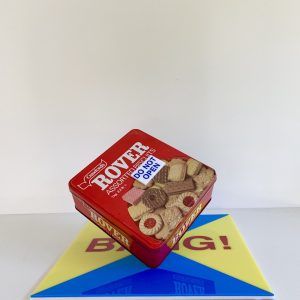 During the 70s and 80s my parents took us to Weymouth on the south coast of the UK. It was a predictable holiday until – just before my 10th birthday – a red biscuit tin with a label saying ‘Do Not Open’ was spotted by the edge of the sea.

The police were called, the stone beach was cleared and hundreds of people watched from the balcony above the beach chalets as the bomb disposal squad arrived to safely detonate what was widely thought to be a possible IRA bomb.

It was not.
It was biscuits.

All threats were taken seriously because it seemed unusual to not know someone whose life had not been touched by actual or possible IRA activity.

Using a 1980s UK biscuit tin and plexiglass, bright colours and childlike language ’Do Not Open’ has been designed to include elements of 1980s toys – including bright colours of Fisher Price products and the word ‘bang’ that was always present when playing with your Action Man.

The aim of ‘Do Not Opem’ is to look playful and at the same time represent the possible scenario and the actual conclusion. 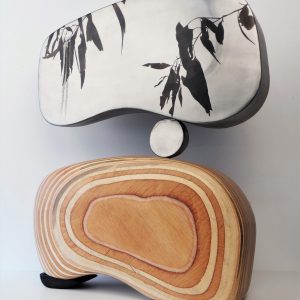 I am always attracted to a lone mysterious caravan in the bush. ‘Sequel’ with no window or door is like a crucible holding human stories. Some happy, some sad, stories of frailty, strength, vulnerability and beauty. Lives which are anonymous in their setting, but for the reflected shadows on the caravan walls. 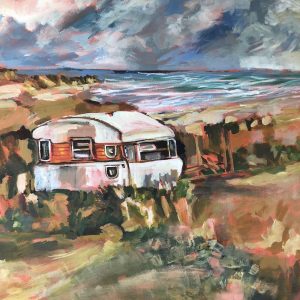 My painting on paper Splendid Isolation is the result of studies of caravans in isolated spots on King Island Tasmania
I did a series of paintings and drawings based on field trips to various places on the island where caravans remain as testimony to family holidays in secluded places away from it all. The vibrant colours of the painting suggest the wild landscape and rugged beauty of a remote getaway. 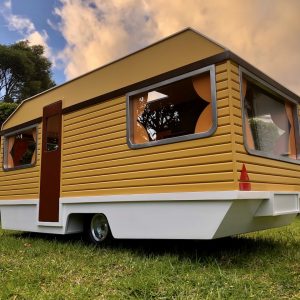 Since my childhood in the 70s I have been creating dreamscapes. playing with dimensions and scaling, this work is a whimsical version of the miniature Matchbox Europa Caravan toy that I had in my possession since early days. This is one of the pieces I have created as part of a body of work of “Mini to maxi” scale. 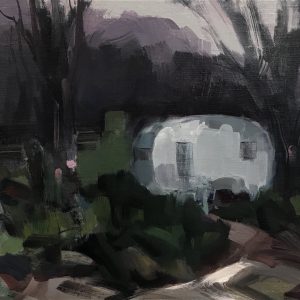 Rest, recuperation and intimacy. Caravans – a way to escape find peace within relationships and with nature itself. Lush-life can be simple – why overcomplicate things?
This work is part of my ongoing exploration of our beautiful county – finding unique perspectives within the everyday. 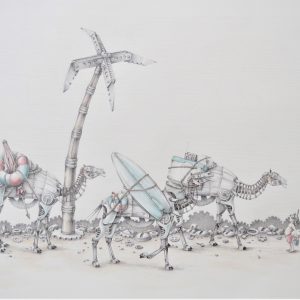 ‘We took the Caravan to the Beach’
Which way do you travel? This question posed on the entry form got me thinking of all the different ways I have journeyed around the world over the years. It then occurred to me that just about the only way I have never travelled is in a big aluminium box on wheels that we call a caravan. So, I had to think outside the box and create the vision of a caravan of fancy. I travel in my imagination to places I want to be and places I have been. Drawing my mechanical gizmos that mix reality and life with the technical, I created a convoy; procession for travellers, a train of camel-like vehicles to journey to the seaside. A caravan of dreams. 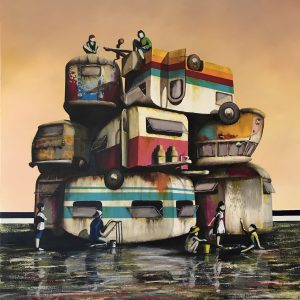 Each year the foreshore caravan parks become a hive of activity as families gather to enjoy the Summer. The same Caravans set up each year perching almost on top of each other form a temporary village where children re-unite to play and explore for the entire Summer. The annual event becomes an inter-generational celebration as years go by. Children grow up and bring their own new families to the foreshore caravan park to enjoy the experience again and again. 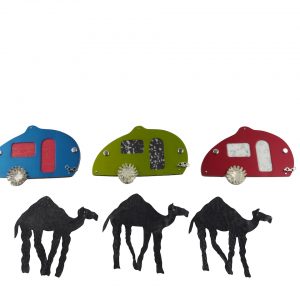 Crossing into the Thar Desert of Northern India in a caravan of camels; towing my red teardrop camper across the Nullabor Plain; the laminex table and anodised aluminium beakers of childhood family picnics. These are things I remember with longing as I contemplate my isolation sanctuary.
Memories are like childhood drawings, framed by simplicity, just the outline of the thing itself. To make this set of brooches I take the symbols of nostalgia and the materials of my childhood to create a tonic for the times, a hope for release. 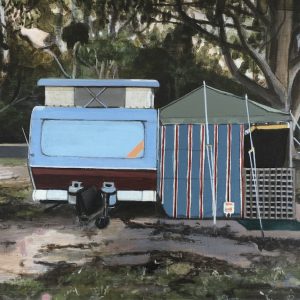 An intimate portrait of a caravan located in Mallacoota. I paint portraits of homes in the landscape.
I have a long-standing interest in the place where architecture and nature coexist; I capture in paint glimpses of the domestic and botanical in my immediate environment. My starting point is photographic documentation which is transposed and reconfigured on to small wooden panels. these painted snapshots sitting somewhere between a closeup and a poetic vignette. 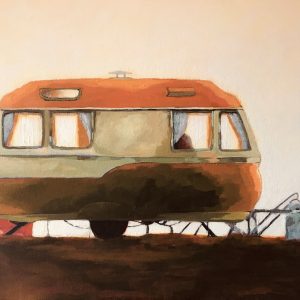 I began my caravanning life when I was about 10, I guess. Mum and Dad bought a second-hand van and we trundled down the coast every school holiday. I loved the freedom I got down there – we could disappear down to the beach whenever we felt like it, sit by bonfires at night and spend quality family time. Recently we camped in New Zealand and I admired this groovy orange retro van which was parked at the top of the beach. At sunset the amazing light shone around and through it and I feel strangely comforted by the familiar shapes and warm colours. 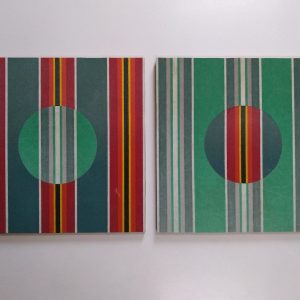 In my childhood, we went for road trips and stayed in caravan parks. We had a heavy canvas tent and later a pop-up campervan but some families had caravans and some caravans had annexes. Caravan annexes were made from striped canvas, the same canvas that is ubiquitous on window awnings throughout the Melbourne suburbs. Having sourced some old faded striped canvas, I set out to create works initially inspired by a particular memory of staying in the Charlton Caravan park in around about 1970. There was a summer thunderstorm. The river flooded, the Caravan Park flooded, the bowling green beside the Caravan Park flooded, and we caught frogs with our thongs. These works, whose titles derive from popular caravan brand names (Viscount, Sunliner, Voyager), grew out of long gone holiday memories. 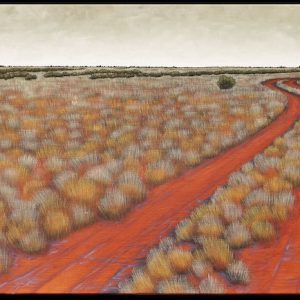 The dirt roads of the Outback in Australia hold a special significance for us all…
There is a mystery in these tracks – unsigned , rough , sometimes unpassable … where do they end up? where do they go?
It is metaphor for this ancient country – the edges of which are well settled and thoroughly explored, comfortable along the coast, the climate bearable by the proximity to fresh water and the sea.
Inland, different story. here the ambitious traveller better be well prepared, and take a survival kit.
No where else can you feel the true age of this continent, and the road that leads you there takes a bit of courage.

I keep coming back to this imagery again and again in my work, and perhaps it is a metaphor for life, a yearning for connectedness, a desire for solitude. 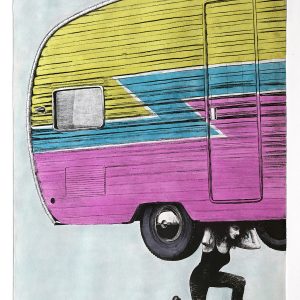 How laborious can it be to unwind in this ‘modern civilisation’? We spend many hours researching the perfect destination, the best means of travel and the perfect itinerary. We read the ‘Lonely Planet’ from cover to cover to ensure we see all the sights and go on all the walks and don’t eat somewhere lousy. No more getting lost or going on adventures. We’re too risk-averse. There’s no time! We only have a few weeks off per year, so we have to rush to relax.

I wonder if it’s connected to the belief that work is virtuous (our protestant work ethic) and not working makes you wicked, so you have to excel at doing holiday.

Who votes for beers in the back yard?! 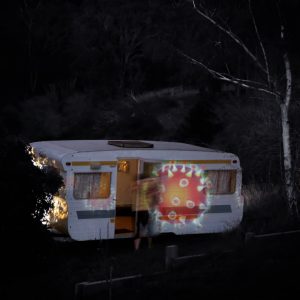 The home is a place of sanctuary but it can also be a place uncertainty. The caravan represents the inner sanctuary that we hold within ourselves and during times of crisis, it is the psychological and emotional space the we can retreat to. This photographic work depicts our need for safety within unpredictable times. 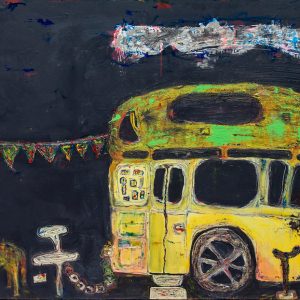 My work combines the joyous elements of holidays in a caravan, the thrill of a summer adventure away , the treat of a visit to the Circus. No shoes, less rules, no homework, no bedtime curfew. Evoking feelings of envy towards the families who have the brand
new shiny caravan, the home away from home.
All the while knowing that your homemade, cobbled together monstrosity on wheels, is truly the only caravan that matters. 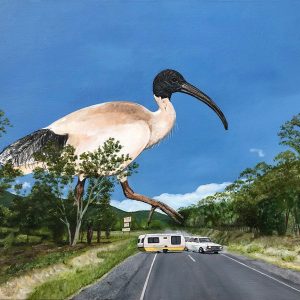 As a child, the summer holidays were often spent in Brisbane with my grandparents. Endless days on the beach, in the backyard, or in parks, followed by long afternoons playing Canasta with my aunt, and evenings watching The Goodies and re-runs of M*A*S*H while my grandfather dozed in his armchair. A common fixture was the Australian White Ibis. These days we disparagingly refer to these birds as Bin Chickens, but back then my sister and I called them Cheezul Birds. On more than one occasion they had raided our picnic blanket and stolen Cheezuls, flapping away with their delicious orange prize.
This painting explores our relationship with nature and a possible revenge scenario as the vengeful bin chickens wreak havoc on the human intruders and reclaim their habitat, much like Kitten Kong in that episode of The Goodies.